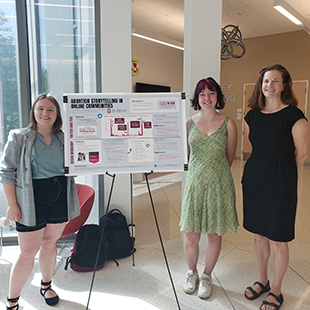 Absolutely. Abortion generates strong emotions that reverberate across the country, especially in the aftermath of last summer’s Supreme Court decision to strike down Roe v. Wade.

Michaela Krawczyk and Emily Rhoades understood the strong passion generated by researching abortion access. It was, Krawczyk says, a compelling reason to do it.

“It is so interesting and important,” the Luddy School of Informatics, Computing and Engineering senior majoring in informatics says. “It’s such a divisive subject, but it’s also so common. Almost one in four women will have an abortion. That’s a fascinating tension.”

Their “Abortion Storytelling in Online Communities” findings -- developed through mentoring by Katie Siek, Luddy School professor and chair of informatics, and Anne Kavalerchik, IU informatics and sociology Ph.D. student -- earned them a spot in the March finals of the American Association for the Advancement of Science 2023 E-Poster Competition. They are one of three national finalists.

The winner receives $500, a one-year AAAS membership and a digital subscription to the journal, Science.

“To become a finalist in a national competition and get to present at this very competitive conference is an amazing accomplishment,” Siek says.

Krawczyk will present their poster at the Walter E. Washington Convention Center in Washington D.C. on March 3 as part of the AAAS annual meeting.

The goal is to reduce the stigma regarding abortion, spark conversation on the topic and encourage people to share their stories. Future research could include sending abortion stories to targeted audiences.

Siek praises the courage to address the abortion issue and the open mindedness to ensure that “everyone’s voice would be heard.”

The American Association for the Advancement of Science focuses on advancing science, engineering and innovation throughout the world. It seeks to inspire the global scientific community by celebrating scientific excellence and science-informed decisions and actions. It promotes a robust research system, fosters diversity, builds trust and showcases progress.

Their research showed a huge online presence of abortion narratives. They investigated the timing of the tweets and recorded the responses. They found most tweets were a response to current abortion issues.

Their conclusion -- to make an impact, story-telling postings should come before an event and not after. The more consistently these stories are told, the better the chances of changing policies and decisions.

“The collaboration of everyone involved, the difficulty to find opportunities and to seize those opportunities to do intradisciplinary research is challenging for a host of reasons,” Kavalerchik says. “It’s hard to find the audience and hard to combine different methodologies and theories from these different backgrounds. That they were able to do that as undergraduates in an eight-week program is extraordinary.”

“It’s also scientific curiosity,” she says. “They really wanted to explore this important aspect of reproductive rights through a novel approach.”

Krawczyk, a Cox Research Scholar, worked with Siek for over a year before finding the right research topic. Krawczyk wanted a project that combined her interests in informatics, gender studies, user experience and media.

“I wanted something that I’m passionate about, which is increasing abortion access. I knew this was the perfect intersection of my interests.”

Adds Siek: “She kept coming back to this topic. She wanted to know how powerful stories can change people’s perspectives. We didn’t have those stories, so clearly, we had to start there, find the stories and measure that power.”

Siek says it was a matter of giving Krawczyk “the resources, make sure she’s using the right processes and letting her go.

“It's been an ideal undergraduate mentoring experience.”

Research accelerated during the 2022 summer REU program, which is funded by the National Science Foundation. It featured eight students, three from Indiana University and the rest from around the country. That’s when Rhoades joined. Her work with Kavalerchik included learning Python, a high-level computer programming language, as well as data collection, cleaning and analysis.

“I was impressed with how well they both took on learning new methodology,” Kavalerchik says.

After the summer program, Siek encouraged Krawczyk and Rhoades to enter the poster in competitions. The AAASE entry included sending a five-minute presentation video. Judges called it “outstanding.” They said, “The methods used were creative and visually interesting.”

At the finals, Siek says Krawczyk is likely to get push back from computer science and engineering groups that don’t understand informatics role in combining social and computer skills to solve problems.

“I’m thankful Michaela gets the chance to face that,” Siek says. “She’s this great mix of social science and technology.”

Krawczyk and Rhoades also have applied for the National Center for Women in IT award, which has a $10,000 first-place prize.

Win or lose, this project has made a big impact on Krawczyk, who is deciding on whether to start her career after spring graduation or pursue a Ph.D. in Informatics.

“This is the first research project where I’m way ahead of the quota hours. There’s no lack of motivation.

“Even when I’m struggling with data analysis, reading these stories and knowing I facilitated these conversations is very rewarding.”