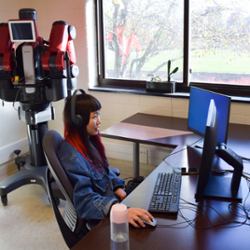 “They are students embedded in robots,” the CRA Computing Innovation fellow and postdoc says with a smile.

Of course, they are.

Elmimouni describes the robots as iPads on sticks with wheels. Think Isaac Asimov meets Star Wars droid meets, well, you. Lacking arms and legs, they can’t climb stairs or operate elevators, but they can take students on sci-fi-like educational journeys.

And make it fun.

“The experience was amazing,” says Hannah Jiao, a second-year master’s student studying human computer interaction design. “It was like I participated with another body.”

Welcome to the Luddy School of Informatics, Computing and Engineering cutting-edge study, “Exploring telepresence in the classroom.” The study is funded by the Computer Research Association and Computer Community Consortium through a Computing Innovation Fellowship. It allows students to participate in class without physically being there.

Except, they are there. They can move, talk, see and hear.

“It’s like my soul is here,” Jiao says from the Myles Brand Hall conference room where she operates the robot, “but my body is there.”

Or, as Elmimouni puts it, “The student is beamed into the robot. It’s like a second you. Your face is there. You see and hear what your classmates see and hear.”

Šabanović, associate dean for undergraduate education and professor of informatics, is the study advisor. Robots are used in her classes, as well as those of Katie Siek, professor and informatics department chair. Elmimouni is the main researcher.

On this postcard-perfect autumn afternoon, Jiao is embedded in one robot. Sampada Bhatnagar, a second-year master’s student in human-computer interaction design, is embedded in the second.

Bhatnagar thinks this a new and fun learning experience.

Class is starting and the robots roll to the front row. Lacking heads that turn, Robot Bhatnagar and Robot Jiao must move their bodies to keep the high-energy Šabanović in view. Robot Bhatnagar works it hard while taking notes. Students notice.

“Are robots taking over the class?” jokes Michael Saari, a master’s-of-fine-arts candidate.

“I hope not,” Šabanović says with a smile.

But then, as Robot Jiao talks to Robot Bhatnagar and then to Saari, conspiracy surfaces.

“It’s just another day of robots taking over the world,” Šabanović  says with a laugh.

It’s not the last laugh. 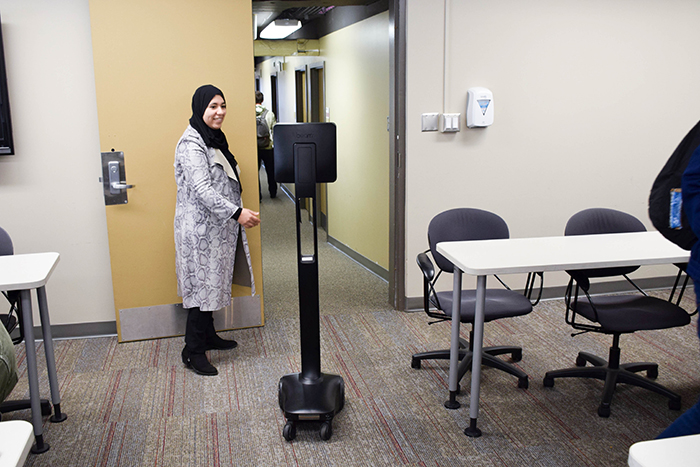 Robots have feelings. Wait. People embedded in them have feelings, and Elmimouni enforces courtesy with a marine instructor’s subtlety.

A student once asked Elmimouni if she could take a picture of a robot. Elmimouni quickly set her straight.

“I said, ask (the person embedded in the robot). You’re taking a picture of her.”

Elmimouni pushes respect even as technology pushes the boundaries of what that means. Robots aren’t taking over, but they do bring opportunities. This study facilitates that. Besides classrooms, telepresence robots can be used for attending conferences in other countries when they’re not able to get visas, for work meetings and more.

Elmimouni, who has worked with robots since 2017 as part of her research in the intersection of human computer interaction and computer-mediated communication, is a driving force. A member of Luddy’s R-House Human Robot Interaction Lab, she designs and coordinates the study.

Besides writing results for scientific publications (everything students see and hear is recorded; and the data analyzed), Elmimouni hopes to provide robot design and user recommendations “that could be important for classroom context.”

“Robots give you agency over the robot body in the remote space,” Elmimouni says. “That’s the big one. It allows you to be in a remote space when you can’t be there. It’s not like Zoom where you’re not mobile. You have the feeling that you are there.”

Robots could help students with long-term illnesses who can’t get to class.

With robots, even during remote learning, professors can lecture as they normally would, and students embedded in robots listen and take notes like everyone else.

“It adds to the independence,” Elmimouni says.

It also gives students an alternative to missing class, a major goal for Šabanović and Siek.

For example, one student was set to help give a project presentation with her group, but couldn’t make it because of illness. The professor contacted Elmimouni, who told the student how to install the app and operate a robot.

“If this was Zoom,” Elmimouni says, “someone would have had to carry a laptop around for her to see what was going on. This way, she presented with her teammates. She had the feeling of being there.”

These robots have two hours of battery power. They can be manipulated from anywhere by cell phone, laptop, desktop or any electronic computer device. They can go wherever there is Internet coverage.

There are challenges. Embedded students have no hands to raise, so to ask a question or make a comment, they shout. When that happens, Elmimouni says, “People aren’t expecting it because they can’t see them. They just start giggling.”

Embedded students are not aware of everything around them. Robots have no side- or rear-view cameras. If someone comes up behind you, Elmimouni says, “you don’t feel that.” If someone asks a question from the other side of the room, there is no head to turn to see. Turning the entire robot body, Elmimouni says, can be disruptive, even embarrassing.

Design improvements could include installing a light that glows when a student wants to talk, and an audio filter to cut out extra noise. Currently, the microphone “amplifies everything” and makes it difficult for embedded students to hear instruction. The camera could be upgraded to make it easier for students to see slide presentations.

During lectures, instructors are asked to make eye contact with embedded students and when the student/robot moves, don’t keep asking if they’re okay.

“They’re just moving so they can see better,” Elmimouni says.

“Any technology has limitations,” she adds. “This gives you some possibilities and opportunities.” 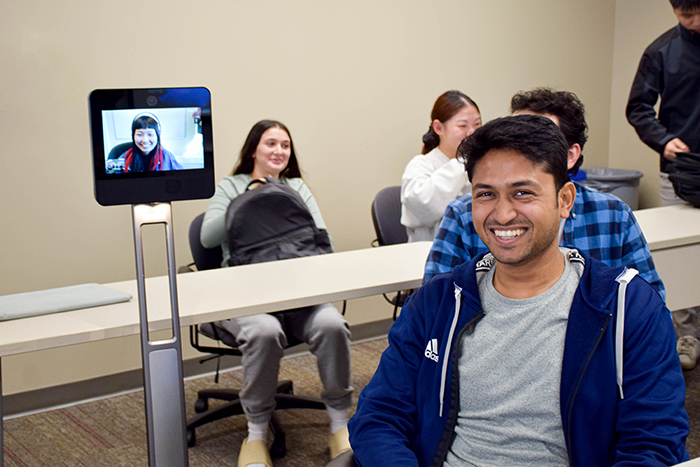 Robots over Zoom? For Šabanović, it’s a no-brainer.

“I like it better than Zoom because I know the students are really there,” she says. “This supports more interaction with other students.”

Interaction has limits given robots lack agility. When students divide into groups, it takes time for robots to maneuver into position.

Students move robots with a keyboard or a mouse. Efficiency and speed improve with use.

One possible improvement is developing robots that move themselves. That would involve artificial intelligence and added expense.

“If the robot could do that,” Šabanović says, “it could be easier for the student.”

While the study takes precedent, there have been a few non-study instances where, Šabanović says, “If students are sick, and want to use Zoom, I’ll ask if they want to try it with a robot.”

During her lecture, Šabanović addresses privacy risk issues with human-robot interaction. Because people often find robots “cute, non-threatening and non-judgmental,” she says, they might disclose personal information and put themselves at risk.

Bhatnagar has other worries.

“I wonder how loud I was, and if I was distracting (Šabanović) by moving back and forth because I wanted to look in her direction.”

The answers -- she wasn’t loud and wasn’t a distraction.

“It’s always fun when robots come into class,” Šabanović says. “Everybody is a little surprised.”

“I’m totally comfortable with having a few robots,” Šabanović says. “If they were all robots, I don’t think that would be fun.” 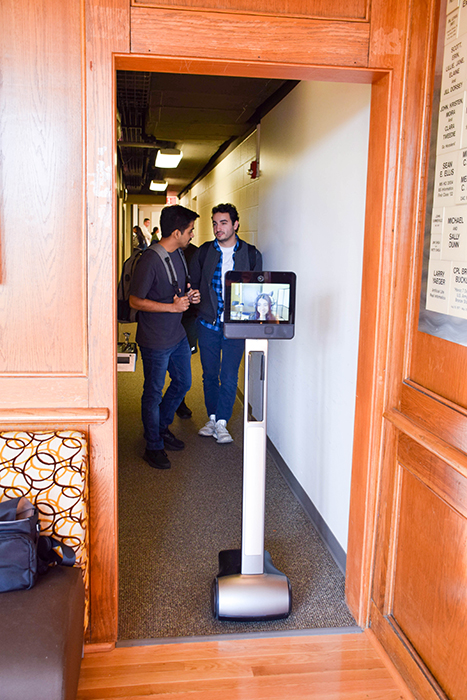 Class is over and Robot Bhatnagar heads back to the conference room. The journey is full of twists and bumps through hallways and rooms reminiscent of a slow-motion theme park immersive ride with one big exception:

“Hi,” Robot Bhatnagar says while waving to a student as she passes him. He waves back and moves out of her way. “Hello,” she says with a laugh to another student who, without prompting, opens a door for her.

“People were helping me,” she says. “I am controlling the robot, but they moved me place to place when I hit obstacles. That was interesting.”

It usually takes seven minutes for robots to travel from conference room to classroom.

“They are a bit slow,” Elmimouni concedes.

She says as many as four robots can be used in a class at a time if they are well managed and smartly used. For Bhatnagar, one thing is clear: