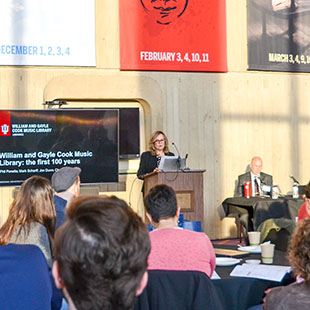 In this case, it’s an uncluttered office in the William and Gayle Cook Music Library.

“It was a dream come true,” says Dederick, Latin American Music Center librarian and curator of special collections. She refers to the recent Midwest Chapter of the Music Library Association’s annual meeting. It was held at Indiana University in conjunction with the 100th anniversary of the music school and the Cook Music Library.

As a co-chair of the chapter meeting’s local arrangements committee, she helped run the 81st annual event that was, in so many ways, a Cream ‘n Crimson celebration.

For three days in late October, 58 music librarians and 14 music librarianship students from around the Midwest and the nation, gathered at the Jacobs School’s impressive facilities -- including the Simon Music Library and Recital Center, the Musical Arts Center, and Ford-Crawford Hall -- to focus on the past, present and future of the music library and its associated programs. Eleven others participated online.

Because of the pandemic, this was the first in-person meeting since 2019. Locations are alternated each year among Midwest Chapter institutions.

Indiana University last hosted the chapter meeting in 2001. It was set to host again last year, but the pandemic delayed it (as well as the anniversary celebrations) until this past October. The Midwest chapter, the nation’s largest, consists of the states of Indiana, Illinois, Kentucky, Iowa, Michigan, Minnesota, Missouri, Ohio and Wisconsin.

Chuck Peters, associate librarian and head of Cook Music Library cataloging, was co-chair with Dederick. Both are graduates of IU’s Music Librarianship Program.

“I’m very pleased this happened here,” Dederick says. “It meant a lot to a lot of people.”

It certainly meant a lot to Dederick, who has worked at the Cook Music Library for more than 25 years, and whose deep musical roots include playing the violin and singing, although, she admits with a smile, “I’m a few years out of commission.”

Combining the meeting with the 100th anniversaries added to the challenge and excitement, she says.

“It felt appropriate to use the space that the school has to offer. We have fantastic facilities. Why not show them?”

The MAC was a focal point.

“The space is so beautiful,” Dederick says.

A key presentation -- 60 Years for the Cause of Latin American Musics -- highlighted the Latin America Music Center. The center’s goal is as strong now as when it opened in 1961: continue elevating and supporting Latin American music and musicians around the world. Over the years, directors and representatives have come from Chile, Venezuela, Peru, Puerto Rico, Panama, Argentina, Brazil, Costa Rica, Columbia, and more.

“Each has left a mark on the collections we built,” Dederick says.

Presentation speakers were historians rather than librarians.

“They addressed the difficulties in promoting and accessing Latin American musics,” Dederick says. “They talked about the novelty of the content.”

“His talk was way beyond what I thought it would be,” Dederick says.

Burkholder highlighted Carmen Helena Tellez, former LAMC director, Jacobs professor, choral conductor and scholar who went on to teach and conduct at Notre Dame. She passed away in December of 2021.

“He addressed the influence and importance she had on the promotion of Latin America musics,” Dederick says.

One panel discussion centered on Ralph Papakhian, a major presence as head of cataloging at the Cook Music Library from 1975 to 2010.

“He was very involved in the mentoring of music librarians and with faculty governance,” Dederick says. “It was very touching.”

Another highlight featured the state of Indiana’s contributions to popular music via the Great American Songbook Foundation, which is based in Carmel, Indiana. Luddy School of Informatics, Computing and Engineering graduate Anna LoPrete is its music librarian.

The presentation spotlighted composers such as Bloomington native Hoagy Carmichael, Cole Porter and Noble Sissle, plus performers such as Michael Jackson, Florence Henderson (most famous as the mother in the 1960s’ TV sitcom, The Brady Bunch) and the Ink Spots (a popular singing group from the mid-1930s to the mid-1950s).

“It is a fantastic collection,” Dederick says. “How is that in Indiana and not New York and Broadway? Anna gave an excellent talk to showcase the Indiana music they collect.”

A big highlight was a panel celebrating the music school and the Cook Music Library’s 100th anniversary. Jacobs and the Cook Music Library consistently ranks among the nation’s best, boasts one of the world’s largest academic music libraries, and draws students from around the world. It has produced Grammy winners, MacArthur Foundation Genius Grant winners and a Presidential Medal of Excellence winner.

Deans from Winfred Merrill to Robert L. Sanders to Wilfred C. Bain to Charles H. Webb to Gwyn Richards transformed the school into an international powerhouse, with facilities to match. What started with the 1885 all-wood Mitchell Hall grew to the 1935 Music Building, the 1941 IU Auditorium, the 1972 Musical Arts Center, the 1979 Music Practice Building and then the 1990s’ Bess Meshulam Simon Music Library and Recital Hall, and the William and Gayle Cook Music Library.

The chapter meeting provided a window into that, and more.

“It was a rewarding experience to have our colleagues in person at our beautiful Bloomington campus, celebrating and sharing the wealth of Indiana University’s musical offerings through talks, music, good food, and collegiality,” Dederick says.

Jason Steptoe -- A Pro Premieres: The After Effects of After Effects! How Video Editing Skills Can Benefit Your Library

Emma Dederick (also Adjunct Faculty) -- 60 Years for the Cause of Latin American Musics.