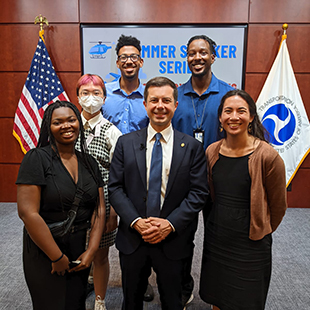 Initiative? Naomi Coleman certainly showed that. Determination? Jack Doehrman was all over it. Rewarding? You’d better believe it.

For Coleman, who is pursuing dual Master of Library Science and Information Science degrees, it was a 10-week adventure in Washington D.C. as part of the U.S. Department of Transportation’s Summer Transportation Internship for Diverse Groups.

“Find what you love and keep working at it to get where you want to be,” he says. “Networking is very important.” 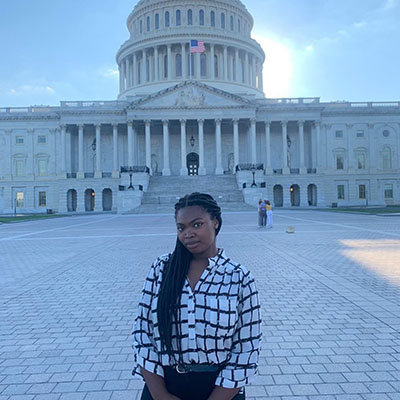 Let’s start with Coleman, who found her internship on Handshake, Luddy’s career-services resource. From last June to August, it gave her hands-on public service experience with the U.S. Federal Government, provided insight into the challenges and innovation in U.S. transportation infrastructure and furthered the Department of Transportation’s goal to increase workforce diversity.

It also delivered high-level networking, which included meeting national figures such as Pete Buttigieg, the U.S. Secretary of Transportation.

Projects included working with the National Transportation Library to ensure its guides had updated links and current information, updating social media policy (it’s done once every 10 years, so she considers herself lucky to work on this project) and cataloging legacy records for the Urban Mass Transportation Administration.

As one of three interns, Coleman also found key words for the Department of Transportation research thesaurus that “focused on human characteristics” and on “disabilities and cultural and racial groups.”

“There were not a lot of terms there that people could use to find resources,” she says.

Their efforts led Department of Transportation officials to tell Coleman they would continue the project.

Field trips included visiting the Library of Congress and the port of Baltimore.

The experience, she adds, enabled her to “meet some great people” and see areas she wouldn’t have on her own.

Coleman has another internship next summer in Atlanta for Cherry Bekaert's digital advisory team.

“I don’t have a ton of technical skills,” she says. “I hope to grow in that area and see where that takes me.” 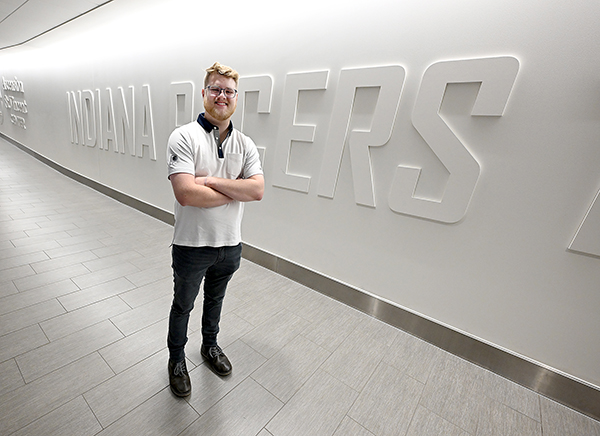 Doehrman’s three-day-a-week internship began in August and will last until the spring. He is in Indianapolis one day and works remotely on the other two, for a total of 16 hours. His job -- handle data intelligence and customer insights.

“The day goes fast,” he says. “I want to do more. It’s nice to have a job where you want to keep working more and have that passion.”

Doehrman, who hopes to land a full-time job with the Pacers, analyzes data involving customers, social media, and food and beverage. His current focus is social media, mostly Facebook, Twitter, Instagram and TikTok.

“I make sense of it,” he says. “I present it to the other Pacers (departments) so they can use it.”

Doehrman tracks mentions on Twitter or Instagram. He views tags, comments and shares to see which posts perform best, and what days and weeks generate the most attention.

With the NBA season underway, there’s been a big YouTube spike for the Mad Ants, Fever, video gaming and Pacers channels. Video interest surges during the NBA and WNBA drafts, the NBA 2K draft, and trade deadlines.

“During all the important dates and events,” Doerhman says, “all the social media accounts spike.”

“We have already seen that score updates and roster updates get the most shares.”

Highlight videos, player and coach interviews, and interviews of a coach or a team general manager after a trade also are big hits.

His next task will be NBA 2K analysis. That will involve Twitch and YouTube streaming.

“That doesn’t get much attention from any of the departments.,” Doehrman says. “We’ll explore anything and everything -- game data, fan engagement, demographics.”

The internship benefits, he adds, are just beginning.

“I’ve gotten my foot in the door for the professional sports industry as well as the sports analytics industry. I’m thankful for all IU and the Luddy School have done to prepare me for this opportunity.”