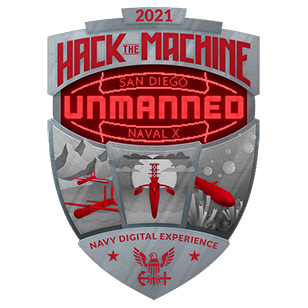 Two students from the Luddy School of Informatics, Computing, and Engineering were part of a team from the Naval Surface Warfare Center, Crane Division, that recently took home second place in HackTheMachine: Unmanned, a technology challenge designed to accelerate the U.S. Navy’s Unmanned Task Force.

Julia Garrard, who is pursuing her bachelor’s degree in computer science from Luddy while also working part-time at NSWC Crane, and Jay Amlani, a graduate student in computer science, took part in the week-long, virtual bug bounty and capture-the-flag competition. The team was tasked with hacking the military’s emerging unmanned pilot systems to discover new exploits and create high-end solutions. The team competed with 41 other industry, academia, and military-based teams.

“NSWC Crane was interested in getting other students involved with their work opportunities,” Garrard said. “Jay and I were the two IU students who participated with NSWC Crane’s team, which promoted more cross-collaboration between the government and academia. I was pleased to be a facilitator in nurturing this relationship and am excited to see IU and NSWC Crane’s relationship grow in the future.”

The solutions developed by the NSWC Crane team will be directly integrated and utilized throughout the Navy. Amlani and Garrard were taking part in their first bug bounty competition, which asks participants to discover and solve bugs in software before they are found by the public.

“I have previous work experience in computer networking and communication protocols, but this was my first time using my knowledge to exploit a system and find its vulnerabilities,” Amlani said. “In the future, I would like to work as a network engineer in a cybersecurity context, and this competition helped me understand how security attacks work and how to develop systems which would defend against such threats.”

“Our success is a testament to my team’s dedication and hard work,” Garrard said. “CTF competitions require a lot of time and investment to be successful. On top of working the normal eight-hour workday, Jay and I spent countless extra hours each day to find and test more exploits. I would not have the knowledge to perform such high-level attacks that deal with the military’s most crucial cyber challenges without the contributions and experiences IU and NSWC Crane have given me to nurture my academic and professional development.”

“We’re proud of the various ways in which the Luddy School collaborates with NSWC Crane, and that partnership manifests in a lot of areas,” said Yuzhen Ye, professor of informatics and computer science and the chair of the Department of Computer Science at Luddy. “A competition such as this makes a real-world impact, and we’re thrilled our students were able to play such a positive role that will help the Navy develop its assets.”