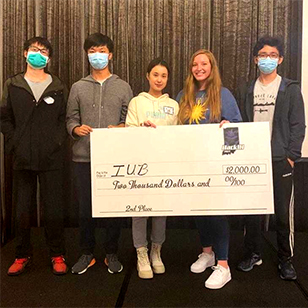 A team of students from the Luddy School of Informatics, Computing, and Engineering earned second-place honors during HackIN 2021, a two-day, capture-the-flag hackathon in Carmel, Indiana, Oct. 9-10.

“I hope the team gained successful experience in a public security competition while exploring and enjoying the event,” said Luyi Xing, and assistant professor of computer science and one of the organizers of the team. “Part of the team attended HackIN 2019 and earned first-place honors, while other members are relatively new to security competitions. Our previous junior members became student team leads this time around. We hope to continuously nurture the Capture the Flag team at IU and build its strength.”

The team was given a game kit that included all the hardware and software needed for the challenge, and competitors were tested on their hardware, firmware, and embedded software analysis skills. The students were required to assemble a circuit board, dump its memory, and start an analysis on the firmware binary. The teams earned points for each state of advancement, and the final three teams were asked to prepare and present a technical document to judges.

“There were so many new things for us to explore and solve during the competition,” Zhang said. “We learned a lot. The team that finished in first place was strong on hardware, and their reverse engineering skills were pretty good. Next year, we will be that much better thanks to this experience.”