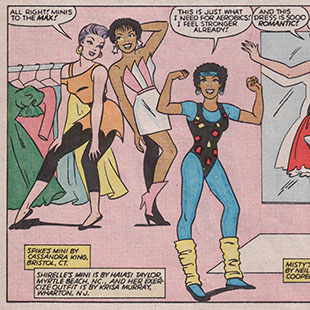 Crayon-colored Robin and Batman stare out behind John Walsh. Their drawings are taped to his Luddy Hall office wall, along with a crayon-colored Nightwing, the adult Robin crime fighter who presents a more warrior-like image.

You never know when you might need superhero protection -- or comic-book inspiration.

Walsh vouches for that. The associate professor of information and library science at the Luddy School of Informatics, Computing and Engineering is a comic book expert. He’s also a kid at heart, with a passion for comics highlighted by his article -- “It Was as Much Ours” – Reader Contributions to Teen Humor Fashion Comics -- which was published last October in Inks: The Journal of the Comics Studies Society.

“It started in the 1970s with a few hundred attendees,” Walsh says. “Now it’s like 135,000 and includes an academic conference, the Comics Arts Conference.”

In a world dominated by superhero movies from the Marvel and DC universes, comic books still make an impact. Understanding why means returning to an era when readers and author-creators combined for unique storytelling.

Walsh’s recent article focuses on teen humor fashion comics -- which humorously depict teenage life, dating and fashion sense -- from Archie Comics and Marvel Comics, which were popular from the 1930s to the 1970s, and then again briefly in the 1980s.

They were dominated, not by superheroes such as Batman, Black Panther, Superman and Wonder Woman, but by Katy Keene, Patsy Walker, Millie the Model and her niece, Misty.

Katy Keene was a film actress and model. Millie Collins was, yes, a model. Patsy Walker started as a high school student and then a young career girl full of romantic adventures before a superhero metamorphosis.

“They used this mechanism to foster creativity,” Walsh says. “It’s an interesting and positive use of the media. You get readers to create content rather than be passive consumers of information.”

Wash’s fascination with teen humor fashion comics started about a decade ago after stumbling across a collection at Ohio State’s Billy Ireland Cartoon Library and Museum while working on another project. That led to further research at Michigan State, which has the world’s largest academic comic book collection via its Stephen O. Murray and Keelung Hong Special Collections. He later interviewed Trina Robbins, the creator of Misty, before finally finishing his Inks article. Because of working on other projects, he says it took “five to six years” to complete.

These comics peaked when radio was king. Television didn’t arrive for the masses until the 1950s, and video games and social media didn’t exist. Comics were major entertainment players. Walsh says a Katy Keene issue “would sell a million copies per issue at its peak.”

A top-selling comic book now might sell under 100,000 copies.

Sometimes comic creators drew themselves into the comics. Woggon often did to interact with his characters and readers.

They influenced millions of people, including world-famous fashion designer Calvin Klein, who sent designs for Katy Keene comics. Other contributors were sometimes included in the actual comics. Walsh says one reader got his own comic section, with his photograph, in an issue that highlighted his contributions.

“He received 600 letters from Katy Keene fans from around the world,” Walsh says.

That contributor wasn’t alone. Because comic books would include contributor names, addresses and photos, contributors -- some under 11 years old -- often received fan mail from all over the world, and even participated in comic conventions.

“At the time, postal mail was the only way for many people to reach out and find others with common interests,” Walsh says. “Now, people use their phones and (social media).”

Contributors came from a wide range of ages and backgrounds (including a 21-year-old Army corporal who submitted a cocktail dress). They sent designs ranging from clothing to paper doll outfits to cars, boats and rocket ships.

The problem -- readers became impatient if their designs weren’t quickly published. That caused Woggons to once draw a tongue-in-cheek “nightmare story” in which angry readers and grandparents swarmed him. He included this message -- “Katy receives thousands of designs -- it may take a while to use yours -- so keep watching!!”

If you think this meant creators were too lazy to devise their own content, think again. It was among the ways to keep readers.

“It had to be more work to go through the mail, read the designs and redraw it,” Walsh says. “It took a lot of effort to foster this culture.”

While the teen humor fashion comic books might have disappeared, the characters have not. Marvel’s Patsy Walker evolved into Hellcat, who uses superhuman strength, nails turned into retractable claws and martial arts skills to vanquish bad guys. Archie Comics characters such as Archie, Betty and Veronica were featured in the recent TV show Riverdale (a supernatural crime drama). Katy Keene also had her own TV show, a musical comedy drama.

“Those were very different from the comic book versions,” Walsh says.

Could such comics make a comeback?

“There are lots of ways consumers interact with comics and media creators through Twitter, YouTube and social media. While readers and fans will continue to create their own content, I don’t know if we’ll ever see it like this in the comic books themselves again.”