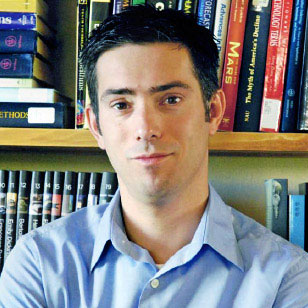 Our society is seemingly sliding into a “post-truth” era, but a recent study from a group of international researchers, including Johan Bollen, a professor of informatics and cognitive science at the Luddy School of Informatics, Computing, and Engineering, discovered that societal language started shifting away from a focus on rationality and toward emotions and intuition as early as the 1980s.

The findings were recently published in the Proceedings of the National Academy of Sciences, in the paper “The Rise and Fall of Rationality in Language.” Bollen and colleagues Marten Scheffer, Ingrid van de Leemput, and Els Weinans from Wageningen University in The Netherlands, conducted a computational analysis of the 5,000 most-used words in English and Spanish over millions of volumes in Google Books from 1850-2019, the entire New York Times archive, and Google search volume data. They found that throughout the 20th century the frequency of emotion-laden words declined, while the use of words associated with rationality and fact-based argumentation continued to rise. However, this pattern suddenly reversed in the 1980s when across languages, the frequency of emotion-laden language surged and the use of rationality-related words dropped, a trend paralleled by a shift from collectivistic to individualistic language. This pattern accelerated after 2007 to the present date.

“As a team, we have collaborated on a number of research projects that leverage our interdisciplinary expertise in informatics, cognitive science, and ecology,” Bollen said. “Recently we’ve become fascinated with how societies as complex systems process the world’s most pressing problems, such as climate change, because that can affect how and whether they arrive at good solutions. Obviously, a societal shift from a focus on rationality to feelings and intuition may have serious consequences, since we depend so strongly on science and technology as a society. The trend we observed may have profound implications for how we, as a society, approach complex and important problems.”

Recent societal developments around vaccinations and public health measures during the COVID-19 pandemic may be an example of the observed trend.

“Many of us sense that something has changed in our society: opinion, intuition, and sentiment seem to have taken precedence over rational, fact-based considerations,” Bollen said. “This has made the pandemic worse and has cost lives. Surprisingly, this trend may have started well before the pandemic, in fact as early as the 1980s according to our results. Our methods points to how we can detect and anticipate such societal changes allowing the public and our society to better address major challenges such as climate change and pandemics.”

The team admits that it isn’t clear what actually caused the pattern that was observed, although the study does speculate that socio-economic policies and social media may be involved. Although the group looked at different languages and sources, the data used may not reflect some cultures and societies that exhibit a different pattern of changing focus on rationality vs. intuition over time. The group plans to continue its research to delve deeper into its results.

“Without technology, Johan and his group would not have been able to analyze such a large amount of data to glean meaningful trends in language,” said Kay Connelly, the associate dean for research at the Luddy School. “This study is the perfect example of what can be accomplished when computing is used in novel ways to draw insights out of data, which is the backbone of our school.”